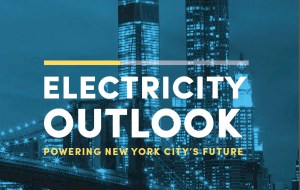 The study titled “Electricity Outlook: Powering New York City’s Future” says that New York City’s need for energy will expand as Indian Point’s scheduled 2021 deactivation approaches. It points out that 81.5% of the city’s electricity comes from natural gas burned in the five boroughs—and that more will be needed to keep New York’s lights on once the Indian Point nuclear plant is taken offline.

The city’s move to transition public and private buildings away from burning heavy oil for heat has accelerated this need.

“Ample supplies of natural gas are critical, as almost all in-city electricity generation comes from natural gas burning plants,” the report continues. “Demand for natural gas, which has increased by 25 percent in Con Edison’s service territory since 2011, has been largely driven by New York City’s Clean Heat Program, which has produced a shift from heavy oil to natural gas in over 3,000 buildings. In addition, household demand for natural gas has continued to increase along with the overall population.”

“FERC should promptly approve the recent application for Transco’s Northeast Supply Enhance­ment project. In addition, the State and City should work together to convene a working group of key stakeholders, including utilities and natural gas suppliers, to develop a strategy for the planning and approval of new natural gas pipelines directly into New York City.”

The report also suggests that city consumers would benefit from the increased supply and depressed prices that would accompany additional natural gas pipeline capacity.