They say everything’s bigger in Texas. Judging by the turnout at the recent Safety Days in both Cleburne and Pearsall, that Texas saying holds true. 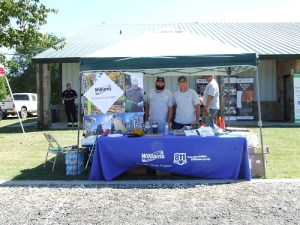 On Sept. 16, Johnson County Emergency Management and Texas 811 came together with companies like Williams to host the Fourth Annual North Texas Safety & Preparedness Day. The event was sponsored by 54 organizations, companies and agencies. More than 500 people came out for the event despite triple-digit temperatures.

Participants had the opportunity to see and hear what it’s like when a backhoe ruptures a natural gas pipeline.

Johnson County Emergency Management Coordinator Jamie Moore was pleased the community could witness what can happen when excavators fail to call 811 before they dig.

“Often, first responders arrive after events have occurred, and rarely do we have the opportunity to see the scene unfold in real time,” Jamie says. “The mock line strike gives us that perspective of how events might have occurred which ultimately help us prevent those incidence from occurring. If we see someone digging, I believe now we are more likely to stop and ask ‘Do you have a line locate? Did you call 811?’”

Locally, Brad Heath, operations manager, and Jeff Williams, operations technician, in the Cleburne area just southwest of Fort Worth, as well as the Arc Park and Cleburne teams, supported the event.

“Our teams really helped make this a safe and successful event working with the county’s first responders. We plan to build on what we learned this year,” Brad says. “Events like this really show the quality of our teams here in the Barnett.” 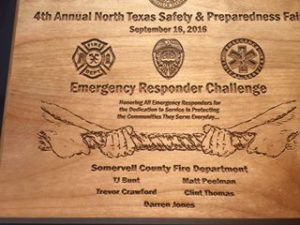 David Marshall, technical specialist staff in the Barnett Shale, carved this plaque for the winners of the emergency responder tug-o-war

Besides giving away two storm shelters, participants enjoyed watching emergency responders flex their muscles in the tug-o-war that garnered the winning company a $500 donation. Williams employee David Marshall, technical specialist staff, donated his time by making a plaque for the winners.

Texas 811, Williams, the city of Pearsall and the Border Damage Prevention Council of Texas hosted the Third Annual Eagle Ford Safety & Equipment Rodeo Roundup on Oct. 7, attracting more than 600 attendees. The event was held in Pearsall, which is the largest city between San Antonio and Laredo and is a hub of exploration activity in both the Eagle Ford and Austin Chalk formations. 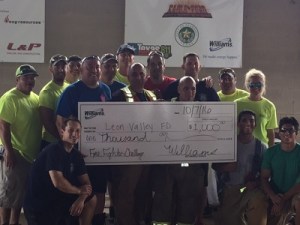 And, because the number one cause of firefighter death in Texas and across the nation continues to be cardiac-related, this year’s event included a First-In Firefighter Challenge timed skills challenge and obstacle course to encourage training of fundamental skills in a fun competition. Leon Valley Fire Department and Hondo Volunteer Fire Department took home $1,000 checks courtesy of Williams.

San Antonio’s News 4 promoted the event with this news story.

Ryan Martin, Williams’ public awareness specialist and board member for Texas 811 believes relationships and true partnerships are formed during events like these.

“You do so much planning and preparing for the event that once it’s over, you’ve made friends you know you can count on and you’ll have a familiar face to work with in the event of a true emergency,” Ryan says.