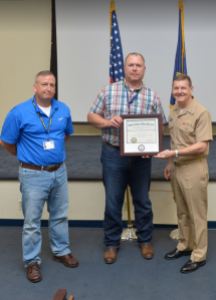 The award recognizes Williams’ outstanding support of the Sailors who serve in the Navy Reserve. The certificate states, “By virtue of your actions, you have upheld the high ideal of service to one’s Country and furthered the cause of freedom through your support of the United States Navy Reserve.”

Mike Turton, senior land representative for our Northeast Gathering and Processing Operating Area submitted the nomination in appreciation for the support he receives from Williams as a Senior Chief in the Naval Reserve.

“I’m proud to work for Williams,” says Mike. “The flexibility and support I’m given is invaluable. I’m able to continue serving my country while also building a corporate career that I enjoy with a company that recognizes and appreciates the skills I’ve developed in the military.”

After serving eleven years in the U.S. Navy, and receiving an Army Commendation for Professional Service in a hostile environment for his time in Iraq, Mike separated from active duty in 2008 as a Chief Equipment Operator and transitioned to the Navy Reserve.

As a Navy Reservist and the Senior Enlisted Leader of his battalion, Mike utilizes his Navy Educational Certification (NEC) and Combat Warfare Badge (CB) to help train more than 800 enlisted members of his battalion in hostile-environment construction of roadways, airways and buildings, including the construction of pipelines between tankers and the shoreline. Mike also earned a Navy Achievement Award Gold Star in Lieu of Fifth Award for activities above and beyond the call of duty for his additional time in Iraq as an active reservist.

Mike has been with Williams since 2013 where he uses the skills developed through his military training to help Williams execute our pipeline projects. He also participates in Williams’ Veteran Business Resource Group (BRG) as a Campus Captain. The BRG helps fellow veterans, who make up about 10 percent of Williams’ workforce, to develop relationships across the company, support one another as they transition from military to corporate careers and participate together in volunteer efforts.

Glenn Koch, vice president project execution, Engineering and Construction, joined Mike at the recognition event on June 24. They spent the day at the Navy Fleet headquarters in Norfolk, Virginia for an exciting and informative event hosted by the Chief of Navy Reserve; Commander, Navy Reserve Forces Command; and the Virginia Committee of Employer Support of the Guard and Reserve (ESGR).

Glenn describes the event as, “A remarkable day providing insight into the daily lives of our U.S. Navy. The resources required to protect our great nation are vast. I didn’t realize how significantly our U.S. Navy depends on and appreciates the ability to draw on members of the Reserve. It requires strong partnership between corporations and our military and I’m proud Williams can contribute through our support of exceptional employees and Veterans like Mike.”

He continued by saying, “It was an honor for Williams to receive this recognition for its corporate stewardship. But, also a personal honor to be in the company of the event hosts and attendees, many of who are decorated members of our military.”

To learn about military Jobs at Wlliams, you can visit our Careers website.