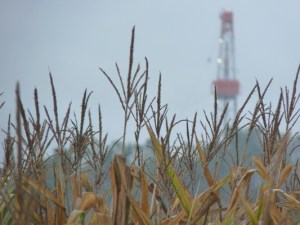 In the distance, a rig in Westmoreland County.

Have you ever wondered what the state’s top environmental official thinks about hydraulic fracturing?

Michael Krancer – who leads the Department of Environmental Protection – recently went on the record while speaking to a Rotary club.

A newspaper story captured the substance of his remarks – as well as his consternation with the commonly conveyed misperceptions about drilling.

In an effort to fight the fiction, he cited an independent study by Penn State showing that hydraulic fracturing of the Marcellus Shale hasn’t affected Pennsylvania’s groundwater.