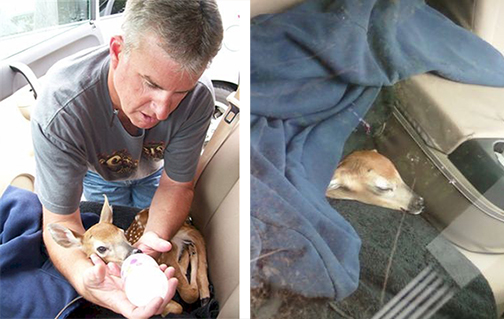 Note: This story appeared in MyWilliams, the internal newsletter for Williams employees

Brian thought he had seen it all during his 26 years working along Williams’ Transco pipeline right-of-way in eastern Pennsylvania.

“I’ve seen all sorts of things on the right-of-way, but this was a first,” recalls Brian, a temporary assistant district manager in Frazer. “I wasn’t expecting to find Bambi.”

While performing a routine creek inspection in West Conshohocken, Brian came across a female fawn, probably no more than a few days old, curled up on top of the Transco pipeline. The mother deer lay on the side of the road about 100 yards away – she had been struck by a car and killed.

Brian had a decision to make. He could get back in his Williams truck and allow nature to run its course, or he could intervene. He chose the latter.

“I didn’t just want to leave her there because I knew she wouldn’t make it,” he says. “She was so young; I didn’t think she could walk. I still had a lot of work to do, so I decided to take her with me.”

Brian recalls the fawn didn’t move when he picked her up. He wrapped her in a towel and covered her with his jacket, laying her on the front seat of his truck.

For the next six hours, as Brian went about his day, the baby fawn slept in the front seat, her head resting on the seat console.

Brian could tell the fawn was hungry, so he stopped at a store and bought some goat milk and a baby bottle. With a little coaxing, the fawn took a few sips and fell back asleep.

Not sure what to do with the animal, Brian took the fawn back to Station 200 located in Frazer. From there Field Technician Robert Mohn volunteered to transport the fawn to a wildlife refuge located about an hour north of the station.

“Rob had heard of this place called the Red Creek Wildlife Center, which cared for and treated injured wildlife,” Brian says. “They do a great job. The owner, Peggy Hentz, agreed to take the fawn and nurse her back to health.”

Brian says he has spoken with Peggy several times during the past few weeks and she reports that the fawn is doing well. She discovered the fawn was born with a cleft palate and predicted it wouldn’t have survived long in the wild with the deformity.

The refuge will care for the fawn for at least two years before releasing her back into the wild.

“Every day we have choices to make, whether we want to step up and do the right thing or look the other direction,” Brian says. “I’m glad I was in the right place at the right time so that I could help.”