Rally for Pennsylvania Jobs and the Energy Industry | Williams Companies

The Marcellus Shale Coalition held a rally in support of the energy industry earlier this month.

Williams employees from across Pennsylvania joined about 3,000 supporters of natural gas development in a march and rally at the steps of the state Capitol in Harrisburg earlier this month.

The event was organized by the Marcellus Shale Coalition, a natural gas industry trade group. It brought together people from all over the state, many of whom traveled by bus to attend. 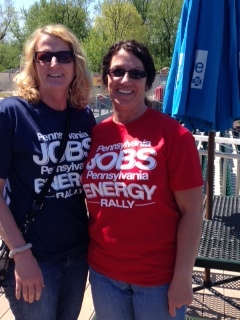 Attendees showed their support for the industry and focused on some of the benefits shale development has contributed to Pennsylvania and the region. These benefits include:

With more than 7,000 wells drilled and many miles of pipeline laid, development of natural gas will continue to help to grow the region’s economy, power our industries and warm our homes. And this is only the beginning.

Policy proposals in Harrisburg – including burdensome layers of new energy taxes on job creators and consumers as well as other measures that would heavily tip the competitive scales against Pennsylvania and toward other states and regions – would place these shared gains at risk. The rally at the state capitol was organized to make sure the industry’s voice is heard.