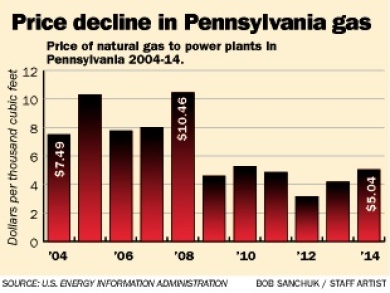 Image from the Times-Tribune article.

In yesterday’s Scranton Times-Tribune, reporter Brendan Gibbons examines Pennsylvania natural gas prices and the effect they are having on the electric power industry. He writes:

“Enormous gas production driven by horizontal drilling and hydraulic fracturing in the Marcellus Shale in Pennsylvania has turned U.S. gas markets upside down. Now, that seismic shift is spreading to the electric power industry and Northeast Pennsylvania is the epicenter of that change…Ultimately, Americans’ choice for power generation, the highest-emitting sector of greenhouse gases in the world’s second-highest-emitting economy, will have implications for the global climate.”

He talks with Jim Adams, senior vice president of fuels for Texas-based Panda Power Funds. The company operates two large gas fired power plants in Pennsylvania which are part of the first generation of new, large generating plants that could proliferate in Pennsylvania. Northeast Pennsylvania’s gas prices are regularly the lowest in the U.S., an important factor behind the wave of projects planned for the region.

Gibbons writes that pipeline companies have proposed enough pipeline space to take more than 4.5 billion cubic feet per day of gas out of Northeast Pennsylvania, enough to supply about 17 million homes. He talks with ISO New England president and CEO Gordon van Welie, who notes that high demand for gas during the 2014 winter combined with a high electrical demand and not enough pipeline capacity left the region within 100 megawatts away from rolling blackouts.

“That situation led to bizarre effects on the price of gas. Last December, natural gas futures in New England traded at the highest rates in the world, said Philip Moeller, commissioner at the U.S. Federal Energy Regulatory Commission, which regulates interstate pipelines. A few hundred miles southwest in Pennsylvania, natural gas futures traded at the lowest rates in the world. Lack of pipeline space is to blame for this, Mr. Adams said. New England paid higher gas prices last winter than Japan, India or Europe, all of which are dependent on imports.”