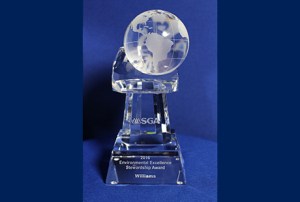 The Southern Gas Association honored Williams for its efforts to stabilize the Eastern Hellbender salamander population.

The Southern Gas Association (SGA) presented Williams with the SGA Environmental Excellence Award for Stewardship recently at the trade group’s Environmental, Safety & Health conference in Baltimore. The award is given to an individual or organization who demonstrates outstanding achievements and contributions supporting environmental stewardship on the job or in the community.

“The Hellbender is a completely aquatic salamander and the largest species in North America, but populations have declined dramatically throughout its range making it a Federal Species of Concern for the U.S. Fish and Wildlife Service,” said Stephanie Timmermeyer, VP, Environment, Health & Safety. 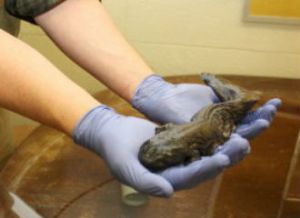 “To stabilize the population, Williams provided funding for conservation, stream protection and the creation of biosecure facilities to rear Hellbenders for release and reintroduction into Ohio streams,” Stephanie said. “This innovative partnership is working to reverse species decline and ensure the future of this state listed Endangered Species in Ohio.”

Williams contributed to the partnership’s new Hellbender Conservation Center at the Toledo Zoo. The facility provides the biosecurity and additional space necessary to raise large numbers of Hellbender youth for reintroduction into the wild. Funding also went towards a second facility at the Penta Career Center.

The Penta Hellbender facility provides high school students the opportunity to participate in a real-world endangered species recovery program. Students are responsible for the daily care of the young Hellbenders, including feeding, cleaning, water quality monitoring and keeping detailed records of the animals’ health and growth. As these students are destined for animal related careers – as zoo keepers, veterinarians and researchers– this experience is providing valuable job skills, while also fostering critical thinking about solutions to today’s environmental challenges.

“Since 2011, the partnership has released 249 Hellbenders back into Ohio streams,” Stephanie said. “Williams’ contributions will help the partnership surpass that total, this summer alone, with the scheduled release of 255 Hellbenders, directly aiding species stabilization of this unique amphibian.”