Northwest Pipeline was the first to bring natural gas service to the Northwest U.S. 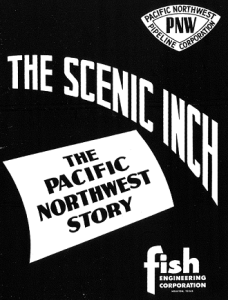 This 1955 brochure cover introduces Northwest Pipeline that began service 60 years ago on Aug. 8, 1956.

Originally known as the “Scenic Inch” because of the beautiful country the pipeline traversed, Williams’ Northwest Pipeline made its first natural gas delivery 60 years ago today to Utah Gas in Monticello, Utah. The first delivery to the Pacific Northwest was at Baker City, Oregon, on Aug. 24, 1956.

Today, the pipeline is a primary artery for the transmission of natural gas to the Pacific Northwest and Intermountain Region. What began as a 1,500-mile pipeline is now a 4,000-mile bi-directional transmission system crossing the states of Washington, Oregon, Idaho, Wyoming, Utah and Colorado.

“Throughout the years we’ve had talented and dedicated individuals monitoring and maintaining the health and integrity of the pipeline, ensuring reliable service for our customers and the communities they serve, year after year,” says Ed Brewer, vice president and general manager of Northwest Pipeline. 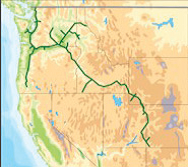 Northwest Pipeline runs from the Four Corners Area to the Canadian border.

Each day, Northwest Pipeline brings clean natural gas to some of the biggest markets in the Pacific Northwest including Seattle, Olympia and Spokane, WA; Eugene and Portland, OR; and Boise, ID. We transport natural gas to local distribution companies that deliver the product to homes, businesses and industry. We also provide natural gas to power generators so they can produce the electricity consumers need.

During its 60-year history, the pipeline has undergone countless expansions to meet growing demand for natural gas. In Washington State, we now provide approximately 85% of the natural gas consumed every day.

The system also includes the Plymouth LNG facility in Washington that liquefies natural gas, stores it in tanks, and then makes it available for communities when there is market demand.

The Jackson Prairie underground natural gas storage facility is another important part of the Northwest Pipeline system. As the largest natural gas storage depot in the Pacific Northwest, the Lewis County, Washington facility can hold approximately 44 billion cubic feet of natural gas. Williams is a one-third owner, along with Puget Sound Energy and Avista Utilities. 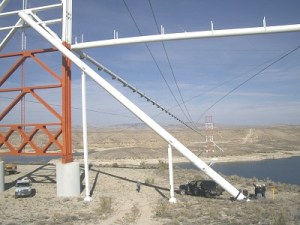 This span of Northwest Pipeline over the Flaming Gorge in Utah was built in 1962.

One of the most breathtaking sights along the pipeline route is the span in the Flaming Gorge National Recreational Area, approximately 50 miles south of Green River, WY. The structure consists of 34-inch diameter pipe supported by a suspension bridge whose main span is 1,290 feet. Built in 1962, the span won the American Institute of Steel Construction’s annual award as that year’s most outstanding steel structure.

“Our ongoing integrity testing, maintenance and monitoring of the pipeline over the years have made this a safe and reliable source of clean natural gas for the Northwest part of our country,” Ed says. “We look forward to the next 60 years.”