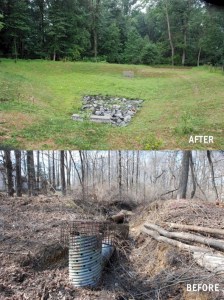 After two years of planning, a severely degraded stream in eastern Pennsylvania has been restored, thanks to a partnership between Williams and the Brandywine Red Clay Alliance.

Located in Chester County, Pa., Ludwig’s Run is a tributary of Brandywine Creek — an important stream used for both public water supply and recreation.

During the summer of 2013 Williams removed and replaced a 2,100-foot segment of its existing Transco natural gas pipeline crossing under both Brandywine Creek and Ludwig’s Run.

Construction on the project began in November 2015 and was completed in April 2016.

“We are grateful to the Williams for support this important project, said Bob Struble, Watershed Conservation Director of the Brandywine Red Clay Alliance.  “It was one of the more challenging projects due to the site conditions, but the result has received excellent reviews from the landowners and the reviewing agencies.”