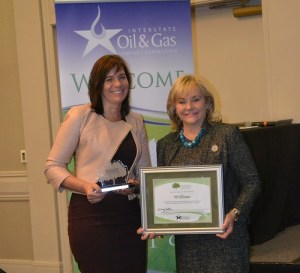 Williams received the IOGCC Environmental Partnership Award for its participation in the Eastern Hellbender Salamander Partnership Project, which seeks to reverse species decline and ensure the future of this Ohio Endangered Species.

Through the partnership, Williams is collaborating with local, state and federal agencies, zoos, non-governmental organizations and educational institutions to help stabilize this species.

Williams has provided funding for conservation, stream protection and the creation of biosecure facilities to rear Hellbenders for release and reintroduction back into the wild. To date, about 250 Hellbenders have been released back into Ohio streams. Another 1,100 Hellbenders are being head-started for future release.

The Hellbender is a completely aquatic salamander and the largest salamander species in North America, but populations have declined dramatically throughout its range making it a Federal Species of Concern. 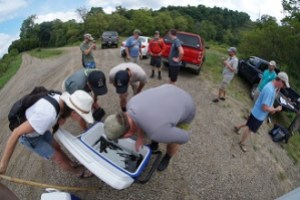 Ohio Division of Wildlife employees and Greg Lipps from Ohio State University prepare to release Hellbenders back into an Ohio River.

“We are proud to be honored by the IOGCC for this important work,” said Stephanie Timmermeyer, vice president, Safety and Regulatory Compliance. “The Partnership’s Hellbender endeavors are at the heart of Williams’ core values. Williams maintains a commitment to environmental excellence by protecting the environment and all natural resources.”

The IOGCC is a multi-state government agency that advocates for environmentally sound ways to increase the supply of American energy.

Oklahoma Governor Mary Fallin presented the award to Timmermeyer and said, “Williams, like so many other companies and organizations, is doing their best to protect our environment and to make a difference.”