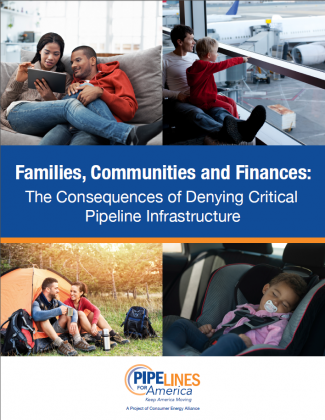 The report, titled “Families, Communities and Finances: The Consequences of Denying Critical Pipeline Infrastructure,” highlights the threat to the delivery of vital oil and natural gas feedstock to power generation facilities and impacts to the reliability of the electric grid. Because natural gas is increasingly used to create electricity, pipeline expansion is more critical than ever. Without more pipelines, natural gas – as well as oil for fuel and power – will not get to market.

“Denying America the critical energy infrastructure it sorely needs, and prematurely shutting off baseload electricity generation starts an adverse domino effect that hurts America, its families, its small businesses and its agriculture, manufacturing and transportation sectors,” CEA President David Holt said. “It would derail the American energy revolution and increase our reliance on imports from foreign nations. Real energy security is not just the presence of abundant natural resources – it is also the ability to readily access and deliver those resources at an affordable price.”

The report is part of CEA’s “Pipelines for America” campaign, which focuses on educating families, businesses and political leaders about the economic and environmental benefits of pipeline infrastructure. The report examined the effects on supply by 2030 from either the failure to permit and construct new pipelines or the inability to obtain necessary permits to approve and maintain natural gas and other fossil fuel-fire electricity generation power, comparing its findings with supply and demand data from the EIA.