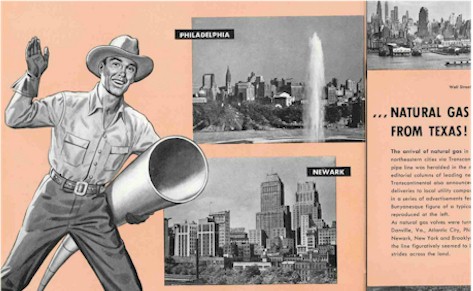 To fully appreciate the astounding level of growth on our Transco pipeline, it’s important to not lose sight of where we started.

Take a moment to check out Transco’s second annual report, printed in 1950. The report provides a rare peek back in time, providing some interesting and amusing color that contextualizes the humble beginnings of the nation’s largest pipeline system.

The report opens with this great line:

“This report marks the transition of Transcontinental from a great pipe line construction project to an operating company.”

It continues, “The first delivery of natural gas out of our system was made Dec. 5, 1950, to the City of Danville, Virginia. Regular service to our New York distributors began Jan. 16, this year, formally signalizing completion of the world’s longest pipe line.”

The report also references a 27-mile “New England extension” designed to extend the northern portion of Transco’s system from Patterson, N.J., to Greenwich, Connecticut. This extension was apparently certificated by the Federal Power Commission in Nov. 1950. “Surveys have been completed and acquisition of right of way is going forward,” the report states. Unfortunately, for some reason this segment of line was never constructed.

300 years? As good a job as those early pipeline builders did in designing the pipeline, their crystal ball might have been a little fuzzy on that day.