This year’s theme “STEAMWorks” is a nod to the late 19th century scientists and inventors. The student participants seized the opportunity to not only create a robot that would meet the rigorous challenges of the course, but also embraced the opportunity to dress in vintage gear-head garb. Think top hats, tails and crazy glasses for the guys and Madame Curie-era vintage dresses worn by the girls.

Our employees volunteered at each of the regional competitions and were impressed with the students, their robots and the incredible engineering skills they possess in order to be able to compete at this level. The sentiment from the majority of employees was that they would like to volunteer again next year.

George Angerbauer, Public Outreach for Northwest Pipeline said, “The whole thing felt something like a cross between the Olympics and a Terminator workshop for teens…the energy, hoopla and serious gear-head atmosphere was massive and impressive.”

FIRST Robotics is focused on reaching all students who have an interest in science and technology through mentor-based, research and robotics 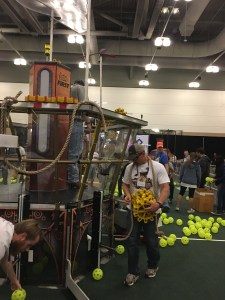 “To ensure we capture the best and brightest minds, we have a scholarship fund to help students who could not otherwise participate, much less go on to college,” said John Shalene, regional director for the North Texas region. “We want to make sure that all students interested in science and technology have the opportunity to be a part of something that could shape their future.” John also noted that a large number of NASA new-hires are past FIRST participants.

STEM education is critical for the pipeline of talent needed for Williams to execute on its business strategy, so sponsoring these events just makes sense.