The Little League World Series is bigger than a game; it’s about a community — a community of baseball lovers and skilled young athletes.

And, for the modest Pennsylvania town of Williamsport, it’s a chance to shine in the national spotlight. The World Series is a 10-day event filled with big-time hits and exciting victories, heartfelt moments of sportsmanship and gripping moments of competition.

Baseball and natural gas go hand in hand, a relationship recognized by Williams at the annual worldwide tournament for players 11 to 13 years old. For the past two years, the company has been proud to support events such as the kickoff parade and block party for the teams visiting Lycoming County.

“It’s a great opportunity to showcase Williamsport and Pennsylvania to the world and to support young athletes as they compete in America’s favorite pastime,” said Mike Atchie, Williams public outreach manager.

“It’s a great display of pride and excitement for these young athletes who have the honor of participating in one of the most renowned events in sports,” Atchie said. This year, more than 40,000 people were estimated to have attended the parade, which features all 16 World Series teams.

The Little League World Series draws athletes and celebrities alike, including the parade’s grand marshal, Baseball Hall of Famer Eddie Murray, who played mostly for the Baltimore Orioles during his 21-year career. Also participating this year will be Hall of Famer Reggie Jackson, “Mr. October,” who will attend Friday’s Williamsport Welcomes the World Street Fair.

The fair, which is also supported by Williams, kicks off championship weekend. Food, music, games — and autographs from Mr. October — will welcome visitors and Williamsport families. Employees from Williams will be on hand to distribute free back-to-school supplies, including pencils, notebooks and sneaker bags stuffed with goodies.

Jackson will sign autographs during the street fair and will serve as a base coach during the annual World Series Challenger Division game Saturday morning.

The U.S. and international division championship games will be held Saturday, with the winners vying for the world title on Sunday. 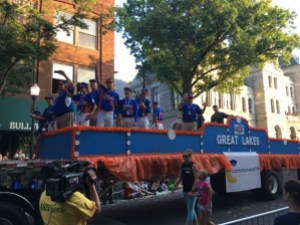 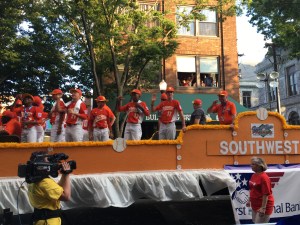