Construction is officially underway in Pennsylvania on the greenfield portion of the Atlantic Sunrise pipeline project – an expansion of the existing Transco natural gas pipeline to connect abundant Marcellus gas supplies with markets in the Mid-Atlantic and Southeastern U.S. 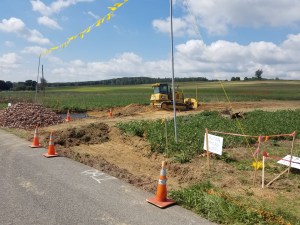 Photo from the project’s groundbreaking.

Williams has worked closely with permitting agencies to minimize environmental and stakeholder impacts, making modifications to more than half of the original pipeline route.  In addition, Williams has worked with local stakeholders to provide an additional $2.5 million for conservation projects located within the project area.

Pipeline and compressor station construction is anticipated to last approximately 10 months, weather permitting. The nearly $3 billion project, which is designed to increase natural gas deliveries by 1.7 billion cubic feet per day, is scheduled to be placed into full service in mid-2018.

During peak construction periods, the project is anticipated to directly employ approximately 2,300 people in 10 Pennsylvania counties. In addition, the project could support an additional 6,000 jobs in related industries and generate up to $1.6 billion in economic activity, according to researchers at Pennsylvania State University.

Williams is making it easy for its contractors to purchase goods and services from local businesses, last week launching a new mobile app – known as WillShop Local — to help connect construction personnel with local service providers.