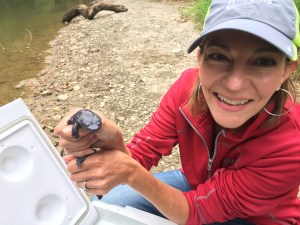 Williams’ partnership with West Liberty University to save a vulnerable species of salamander reached a milestone recently with the release of 12 of the reclusive amphibians back into their native habitat.

The Eastern Hellbender Salamanders were raised from eggs by WLU and finally at age 4 were big enough to release back to the watershed in which they were collected.

The conditions had to be just right for their successful homecoming. The water had to be clear and calm, and scientists had to place each one under a suitable rock to ensure the right habitat for their entry into the wild.

Dozens more are expected to be released in coming years in West Virginia. 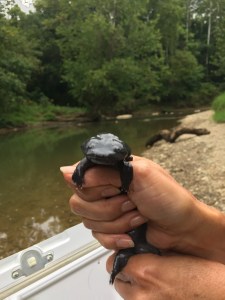 Eastern Hellbenders Salamanders are a species of concern in West Virginia and endangered in Ohio. Williams also partnered with the Toledo Zoo and Penta Career Center in a similar program in Ohio. Several hundred Hellbenders have been reared and released there.

“We’re proud to support these projects, highlighting the importance of the often forgotten non-game species, knowing that their presence is as important to a healthy ecosystem as any other,” said Will Ratcliffe, a manager of regulatory compliance for Williams. “Hellbenders have been around for 65 million years and these projects will help make sure their existence doesn’t end during our lifetime.”

Watch this video to see a news report about the recent release in West Virginia.