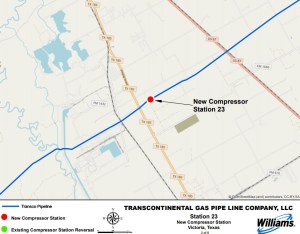 A recent article in the Victoria Advocate provides an update on the construction of Williams’ Gulf Connector project, which was approved by the Federal Energy Regulatory Commission in November 2017.
The paper notes that construction of the approximately $200 million project is on schedule to begin in February 2018, requiring a crew of  approximately 100 workers to construct the new 21,600 horsepower compressor station in Victoria County, Texas.
“The Victoria County construction is part of Williams Partners’ $200 million effort to increase the pipeline capacity in Texas and Louisiana to 475,000 dekatherms per day.
Specifically, this construction will meet the demands of two liquefied natural gas expert terminals, one on the northern coast of Corpus Christi Bay and another on the coast of Freeport Bay…”

The article adds that the compressor station in Victoria County is expected to generate approximately $417,000 in annual property taxes.

The Gulf Connector project involves adding compression and making the natural gas flow bi-directionally on a portion of the Transco pipeline system between Louisiana and south Texas. It includes the installation of three new pipe compressor facilities in Texas, in addition to piping and valve modifications