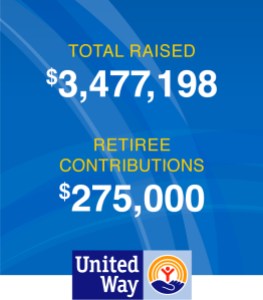 Williams’ 2018 United Way campaign was a huge success! The company-wide campaign raised $3,477,198 – an eight percent increase over 2017 totals. This total includes $275,000 from retirees, and this is before the company match.  The Salt Lake City campaign raised a record total with a very successful retiree reception that will likely be a model for other major locations.

When retirees and employees donate through the Williams United Way campaign, the Williams Foundation will make a contribution equal to your donation to the United Way up to $25,000. This matching benefit applies to United Way organizations in our areas of operation and expansion.

Williams supports more than 200 United Ways across the country. Thank you for helping continue Williams’ legacy of giving.