Not everyone gets a second chance | Williams Companies 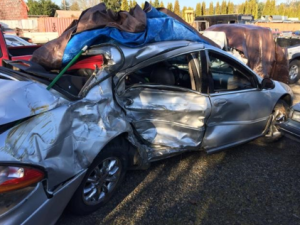 Jessica Malmstedt’s car after the accident.

As spring arrives in its colorful glory and daylight hours increase, more drivers are hitting the road. It seems only fitting that the National Safety Council designated April as Distracted Driving Awareness Month.

Not everyone gets a second chance, so remember to focus on driving and eliminate distractions when you are behind the wheel.

The National Safety Council says that about 26 percent of all car accidents involve cell phone use, including hands-free. Additionally, the Department of Motor Vehicles reports that nine people in the U.S. die every day due to distracted driving.

As a matter of fact, Williams has a distracted driving policy and while avoiding distracted driving is a key safety practice while on the clock at Williams, it should also be carried into every aspect of our lives. This is something Jessica Malmstedt, a field office administrator at the Williams Northwest Pipeline Eugene, Ore., office practices every day now.

Like many of us, she works full-time, is a wife, a mother and has a home to take care of. With only 24 hours in a day, multi-tasking becomes a way of life. We often move at such a turbo-charged pace that our cellphones become the most critical tool in our “get it done” toolbelt.

Her family is her number one priority and what she holds nearest to her heart. Unfortunately, she made a split-second decision to take her eyes off the road to make a phone call, which nearly cost her daughter’s life.

On March 2, 2015, Jessica and her daughter Chloe were in the car heading home after visiting friends when Jessica looked away from the road long enough to speed dial her husband to let him know they were on their way. In that split-second, she missed a stop sign and was hit first by a car traveling from her left and then by another car traveling from the right, much like a pinball being batted around in a pinball machine. The mangled car ultimately came to rest in a ditch across the road, just inches from hitting a telephone pole head on.

The car was so badly damaged that she and her daughter had to be pried out of the car by first responders. As first responders worked to free them from the wreckage, Jessica could only hold Chloe’s head in her hands and beg her to hang on as she slipped into unconsciousness; not knowing if her daughter’s injuries were life-threating.

Fortunately, they are both alive and well today.

Jessica was cited, paid a fine and had to perform 200 hours of community service. As her community service, she prepared and shared her story on the perils of distracted driving to numerous organizations. Even when her 200-hour commitment was complete, she continued to share her story at high schools and other organizations. Jessica is passionate about sharing her story, so others won’t have to live with the guilt she still bears each day as a result of distracted driving.

So, remember, throughout the month of April and beyond, put the phone down, focus on the road, and arrive alive.

From all of us at Williams, “Stay safe out there.”