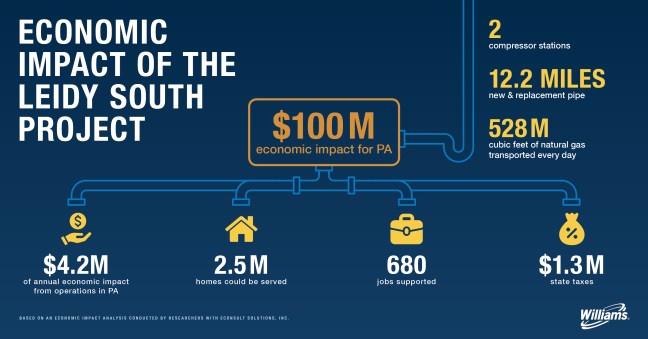 The design and construction of the two new compressor facilities proposed as part of Williams’ Leidy South project will generate approximately $100 million in economic impact to the regional and state economy of Pennsylvania, according to a study authored by researchers at Philadelphia-based Econsult Solutions, Inc.

According to the researchers, the design and construction of two new compressor facilities associated with the proposed Leidy South project could support approximately 680 direct, indirect and induced jobs in Pennsylvania – primarily in Luzerne and Schuylkill counties – with a combined $28 million in employee compensation.

The economic modeling exercise was funded by Williams and uses IMPLAN, a widely used commercial software designed to perform input-output economic analysis in order to estimate the economic and employment impact on each of the counties where construction is expected to occur. IMPLAN is used by state governments across the nation for economic modeling and predicting.

“This report shows how natural gas infrastructure projects like Leidy South can provide a significant boost to our local economy,” said Columbia Montour Chamber of Commerce President Fred Gaffney. “Williams has a long history of operations in Pennsylvania and we are pleased to see the company continuing to invest in our region.” View the executive summary of the study.