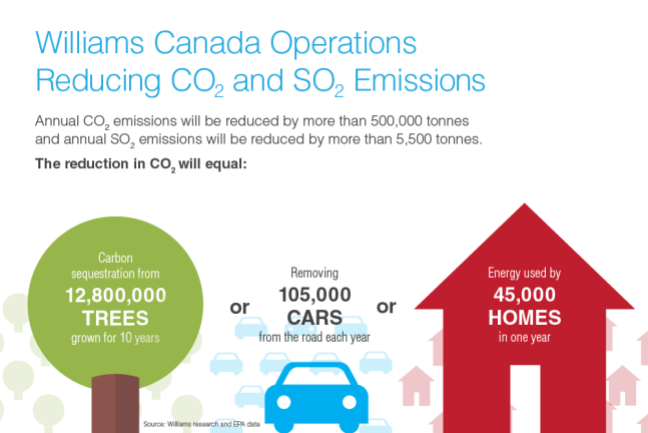 We’re proud to announce the startup of our new offgas processing plant in Alberta. The offgas processing that Williams pioneered significantly reduces emissions at its customers’ oil sands production facilities and adds value by upgrading the mixed stream into the more valuable liquid components selling them to the market.

When combined with Williams’ existing offgas processing at another third-party oil sands producer, the company’s operations in Canada will eventually reduce annual CO2 emissions by more than 500,000 tonnes and annual SO2 emissions by 5,500 tonnes.  The CO2 emissions reduction is equal to taking 105,000 cars off the road every year and equal to the total yearly energy needs of 45,000 homes! To achieve the same CO2 reduction through sequestration, 12,800,000 seedlings would need to be grown for 10 years.  If offgas from all oil sands upgraders in Alberta were captured and processed, CO2 emissions would be reduced by 1,000,000 tonnes in total each year.

One of our core values is “Safety and Environmental Stewardship.” We are fully committed to the health and safety of our workforce and on the protection of our neighbors, the environment and our assets.  Our operations at the Canadian oil sands reduce emissions of CO2 and SO2, which benefits the environment.  We now process the offgas from two of the three oil sands upgraders in Alberta.

“We applaud Williams Energy Canada for their efforts to reduce greenhouse gas emissions, add value to our resources and create good jobs here in Alberta,” said Phillips. “The startup of this plant is a testament to the innovation of Alberta’s energy industry.”

The Fort McKay First Nation, whose traditional land is nearby the new facility, stated: “The Fort McKay First Nation appreciates that the Williams’ facility is expected to have a positive impact on the local air shed by reducing carbon and sulphur dioxide emissions. This will mean a healthier future for our people and for the environment. We are pleased to support companies that are putting the environment first and are respectful of our traditional lands.”

Our world class Canadian assets and operations help the environment, the economy and add value to the province’s natural resources – a win-win-win partnership.