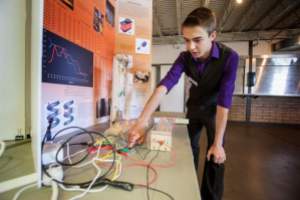 Williams believes that our next generation of employees is being prepared for their jobs by exposure to STEM — Science, Technology, Engineering and Math — and throughout the company we support local STEM outreaches. In the Four Corners Area of Colorado and New Mexico, William was recently a sponsor of the 2016 San Juan Basin Regional Science Fair. The fair, sponsored by San Juan BOCES and held in Durango, attracts middle and high school students from a five county area.

At the event, three students from one Williams family pulled down top honors to advance to the Colorado State Science and Engineering Fair. Trevor Jordan is a senior at Animas High School in Durango and he placed first overall for the second year in a row. Utilizing computers and a wind tunnel at the U.S. Air Force Academy, Trevor’s project is improving efficiency and performance of aircraft wings.

Isaac Jordan is a sophomore at Animas High School. He placed second in the senior division. His project is creating artificial muscle for prosthetics and exoskeleton applications. He is now using 3D printing technology to better show prosthesis at the state competition.

Marissa Jordan is in the 7th grade and is homeschooled. She placed second in her division of junior chemistry. She tested a variety of bottled water samples and tap water sources. This will be her first trip to the state science fair.

Congratulations to the Jordan siblings. They are the children of Mike Jordan, a Williams’ Four Corners Area employee who spends much of his time as a STEM education volunteer in the community.

Read more about the annual fair and watch a video  interview in which Isaac explains his project here.