One Survey Detects Methane Plume Due to Planned Maintenance Event

NASA and NOAA conducted the studies to dig deeper into images from satellites showing the Four Corners area as North America’s “hot spot” of methane. The agencies used methane sensors on airplanes and roving vans to find the sources of the hot spot. A report with their results will be released soon. 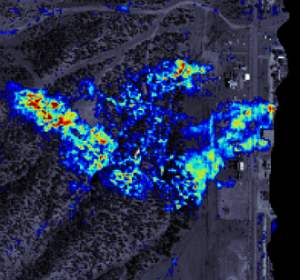 The methane detection NASA photographed is due to planned maintenance work at Williams’ Ignacio plant.

NASA’s report will show that Williams’ Ignacio natural gas processing plant near Durango in Southwest Colorado showed a significant release during one flyover. NASA flew over the facility multiple times during the aerial study, with only one detection of methane.  The report will show that methane was detected at our Ignacio facility at an estimated flux rate of 6,999 kg/hour.

Methane is odorless and not harmful to humans, but is considered to be a contributor to global warming. Williams regularly searches for methane leaks at Ignacio and our other facilities with infrared cameras that can detect the source of leaks.

After reviewing the aerial image that NASA provided and using the date and time of detection, Williams’ operations personnel were able to correlate the detection to planned maintenance work.

“We were working on our molecular sieve regeneration gas system, purging natural gas from equipment on April 20, 2015, the same time as one of NASA’s flyovers,” says Michael Jordan, supervisor of operations at the Ignacio plant. 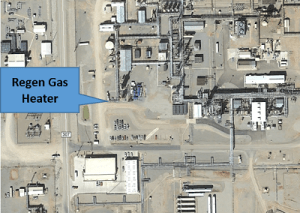 The regeneration gas heater was the source of the detection.

“The equipment finishes de-pressuring in only a couple minutes,” Michael says. “The estimated volume of methane released during the work was 7,040 cubic feet. To put this into perspective, the average U.S. home uses 71,540 cubic feet each year[1].”

All planned natural gas release events at our Ignacio facility are recorded and then used to calculate greenhouse gas emissions from the plant. That information is reported annually to the U.S. Environmental Protection Agency (EPA) according to the Greenhouse Gas Reporting Program.

During maintenance activities, operations personnel reduce the pressure on the equipment as low as feasible, thereby reducing the volume of methane that will be flared or vented. The reason we would vent the gas instead of sending it to flare has to do with the volume and rate of the gas release, existing connections to the flare and the design limits of the flare.

In 2014, Williams’ Ignacio plant received a major makeover replacing equipment that dated back to the 1950s. That renovation led to reduction of nitrogen oxides (NOx) and Volatile Organic Compounds (VOCs) by more than 80 percent.

“We added state-of-the-art equipment including new compressors, turbines and control systems that enhanced and increased the long-term reliability and safety of the plant,” Michael adds.

For this project Williams was recognized by the Southern Gas Association with its 2014 Environmental Excellence Award and was named a Green Business Roundtable Finalist Company by the San Juan Citizens Alliance.

The EPA is currently developing methane reduction strategies for existing sources. In April 2016, EPA began the formal process known as an Information Collection Request (ICR) that requires companies operating existing oil and gas sources to provide information that will assist in the development of comprehensive regulations to reduce methane emissions.

Williams is fully cooperating with this request from the EPA. We also sponsored the Environmental Defense Fund’s landmark research on methane emissions in 2012, which included research of our Four Corners area gathering and processing operations.

Williams takes its responsibility to protect the environment seriously. After all, we live and work in the areas where we have operations. Our employees take pride in the work they do and want to keep their communities safe and clean.

We also believe NASA and NOAA and the universities they work with are doing very important work to study planet earth. They have a great perspective of the bigger picture from above the earth. We thank them for their contributions to good science.