According to Professor S. Matar in his book “Chemistry of Petrochemical Processes” – “Ethylene is sometimes known as the ‘King of chemicals.’” For sure, ethylene is definitely royalty from an American manufacturing perspective. It’s a petrochemical (along with propylene, butane, butadiene, benzene, toluene, and xylene) used as a building block material impacting manufacturing supply chains in a big way. Ethylene’s usefulness throughout chemistry explains why it is manufactured in greater amounts than any other chemical. Ethylene is the link between chemical companies and petroleum refiners.

The American Fuel and Petrochemical Manufacturers (AFPM) describes ethylene’s uniqueness this way: “What makes ethylene unique is a part of the molecule called a double bond. That area is very reactive and particularly well-suited for many different chemical reactions, which makes ethylene one of the most important chemicals in all chemistry.”

The natural gas liquid (NGL) – ethane – is like many hydrocarbons, isolated on an industrial scale from natural gas and as a petrochemical byproduct of petroleum refining. Its primary use is as a feedstock for the production of ethylene. An ethylene plant is sometimes called an olefin plant because of the fact that the end products are olefins.

The process to turn ethane into ethylene begins with what is called “cracking,” a high-tech engineering process that heats (up to 1,500 degrees Fahrenheit) the feedstock (in this case – ethane) to the point that it “cracks” the molecule into several smaller molecules. That’s why some olefins plants are referred to as “crackers.”  This diagram from AFPM shows you the process whereby NGLs ultimately become everyday products with the help of a cracker.

The American Chemistry Council points out that after the NGL, ethane goes through the cracking process to become ethylene such important everyday items as window siding, trash bags, flooring, food packaging, bottles, cups, diapers clothes, footwear, toys and paint are ultimately the result of this process. 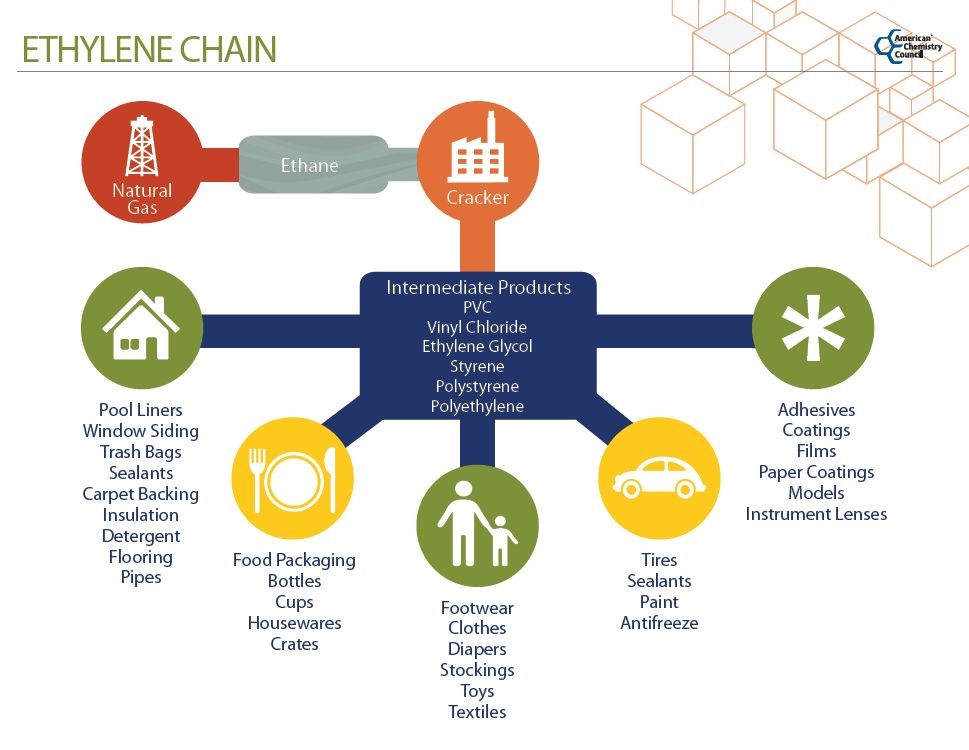