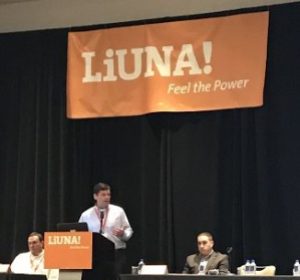 That was the message delivered by Mike Atchie, Williams Partners’ manager of public outreach, speaking at the Laborers International Union of North America (LiUNA)’s 2017 Pipeline Conference in Chicago.

The conference, which was conducted March 7 & 8, featured updates on several planned energy infrastructure projects, highlighting the benefits these projects deliver to communities. It also addressed the need for adequate workforce training necessary to deploy the thousands of highly-skilled laborers utilized during pipeline construction.

LiUNA, a trade union organization that has had a global presence since 1903, is championing the call for the expansion and improvement of America’s energy infrastructure. It represents its members — which consist of a half-million workers, many of whom are in the construction industry — by advocating for a comprehensive domestic energy plan that will meet the nation’s energy needs and create jobs while protecting the environment. The organization also offers practical support, such as a training program that provides members with the skills needed for a wide range of energy jobs.

LiUNA’s members support the development of large-scale infrastructure projects needed to help the country achieve energy independence. These projects create a solid foundation of economic opportunities and family-staining jobs which are critical to LiUNA members.

One of the most significant is the Atlantic Sunrise project, which recently received approval from the Federal Energy Regulatory Commission. The project is anticipated to directly and indirectly support approximately 8,000 jobs during construction, creating a ripple effect which will benefit a wide variety of industries and laborers.

In addition to Atchie, another of the conference speakers — LiUNA’s General President, Terry O’Sullivan — also highlighted the thousands of job opportunities that the project will create. These jobs are often referred to as “gold-collar jobs” because of the above average starting salary.