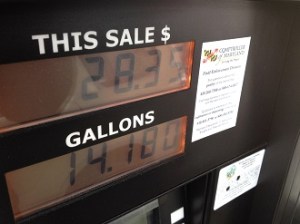 The average nationwide gasoline price is currently the lowest for this point of the year since 2005. One of the chief reasons is a U.S. Energy Department report that domestic inventories of both crude oil and gasoline have surged. Crude oil prices are near a one-year low at less than $46 a barrel.

Blackmon writes, “…this year, the industry has very predictably responded to the higher oil prices from late 2016 by activating more than 250 additional drilling rigs, mostly to drill horizontal, hydraulically-fractured wells in the large oil shale plays, and all of that drilling and fracking has very predictably resulted in the industry drilling itself into a lower price paradigm.”

The New York Times also recently highlighted this summer’s lower gasoline prices in a story titled “Drivers Head Into Summer With A Gift At The Gas Pump.” When Blackmon saw the story, he says he tweeted it out with a the caption: ‘Fracking says, ‘You’re Welcome, America!’

He writes, “While that caption may have been facetious, it also had the side benefit of actually being true.  Because without the advent of the ability to produce what has now evolved into many millions of barrels of oil each day from oil shale formations via the use of hydraulic fracturing, the U.S. would still be importing the overwhelming majority of its oil from OPEC, Russia and other exporting countries, as we were before the shale oil boom began in 2009.”

Blackmon says that without all of the new U.S. production facilitated by fracking, global oil would be in short supply, causing prices to remain high.

“…instead of persistent surplus, and the price of crude would almost certainly still be in the $100/bbl range or higher.  $100 oil would mean gasoline prices in the $4/gallon range rather than the $2.30/gallon range.”