Scott Kimmel had struggled with lower back pain most of his adult life. Two years ago, after a fall, he went to the doctor not expecting the news to be cancer.

As a senior welder in Battle Ground, Washington, and 12 years with Williams, Scott learned he had fractured three vertebrae and damaged his ribs in the fall. 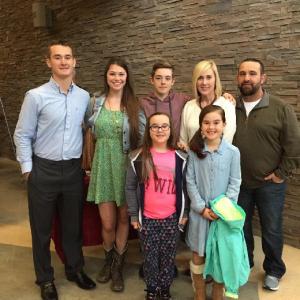 Scott Kimmel (right) and his family.

“I’ll never forget that day at the doctor’s office as long as I live,” Scott says. “I had gone to the appointment by myself that day. My wife was busy with our four kids and I just thought it would be another routine day of labs and talking to the doc.”

A CAT scan showed blotches in his bone marrow. His doctor diagnosed him with Multiple Myeloma, a form of blood cancer where cancerous plasma cells weaken the bones.

Despite caution from doctors, Scott started a trial chemotherapy regime with 14 days of chemo, seven days off. After the first two cycles, there was improvement and he eventually went into remission.

“I was willing to be in the trial with this type of chemotherapy,” Scott says. “If I could help others, I wanted to do it.”

He later received a stem cell transplant. Because the transplant was unsuccessful, he returned to the chemo treatment he had been doing originally and continues with this treatment today.

“During this entire time, I took off about two months from work. I didn’t want to sit around the house feeling sorry for myself,” Scott says. “Now, instead of welding, I inspect welding along Northwest Pipeline and make sure our contractors are following procedures to ensure all welds are good.”

During the past two years, Scott has become close friends with the people at the Leukemia & Lymphoma Society (LLS) that works to end blood cancers. Scott has participated the last two years in LLS’s Light the Night Walk, benefitting Oregon, Southwest Washington, Idaho and Montana LLS chapters. 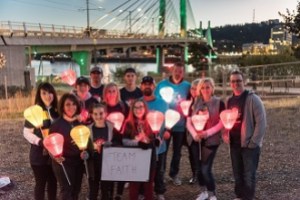 Scott (middle with white light) and his team of family and friends at the 2017 Light the Night Walk in Portland, OR.

“Team Scott & the Family Fighters” raised more than $13,000 this year for LLS to continue research and provide support for cancer patients and their families.

This year’s Light the Night Walk in Portland, Oregon, included more than 6,000 participants. Those carrying white lights – like Scott – are survivors; yellow lights signify someone who lost their battle with blood cancer; and, red lights are held by people who support someone with the disease.

Leaving the hospital that day in October 2015, with the blood cancer diagnosis, Scott was scared.

“My only option was to do what I’ve always been taught – put it in God’s hands,” he says. “I knew I couldn’t do this alone.”

Scott and his family are thankful for the many prayers from friends, family and strangers.

“I encourage everyone facing troubles in life, not just sickness or disease, but anything that is too much for them to put it in God’s hands. He’ll cover for you,” Scott says.

Scott is showing his support for the Leukemia & Lymphoma Society on #GivingTuesday (Nov. 28) to help fund treatments for patients who are suffering from all forms of blood cancers.

Join Scott on #GivingTuesday by making a donation to an organization that you care about.