The International Energy Agency’s 2017 World Energy Outlook projects America will become a net exporter of natural gas and oil by the end of the next decade.

Energy independence is being made possible thanks to hydraulic fracturing, which has boosted oil and gas production in the U.S. to levels that are shaking up how the world consumes energy.

The IEA report says U.S. oil and natural gas production is projected to double from levels seen in 2005. The report notes:

“A remarkable ability to unlock new resources cost-effectively pushes combined United States oil and gas output to a level 50% higher than any other country has ever managed; already a new exporter of gas, the US becomes a new exporter of oil in the late 2020s.” 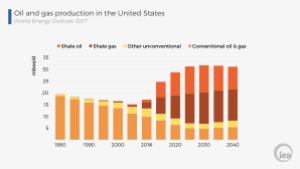 The IEA trumpeted the shale revolution, saying that U.S. shale development is only in the “second or third inning” with plenty more to come.