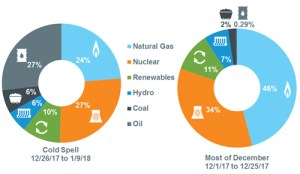 The northeast region was recently reminded of the importance of adequate energy infrastructure when the ISO New England released an analysis that recapped the region’s 2017-2018 winter experiences, including a brutal cold snap that froze the northeast from Dec. 26, 2017, through Jan. 8, 2018.

During that stretch, all major cities in New England endured average temperatures below normal for at least 13 consecutive days, of which 10 days averaged more than 10°F below normal. Boston, Mass., saw its most extreme cold wave in 100 years.

“The cold temperatures, together with winter storms and other complicating factors, led to some of the most challenging conditions our system operators have ever had to navigate,” said Peter Brandien, ISO New England’s vice president for system operations.

A lack of sufficient pipeline infrastructure combined with high demand for natural gas for heating caused pipeline constraints that resulted in high natural gas prices. As a consequence, the price of generators burning natural gas rose higher than the price of generators burning oil or coal, and so a significant portion of the region’s electricity was generated by power plants that use dirtier fuel oil. During the two-week stretch, oil accounted for 27 percent of the generation in New England, compared to 0.29 percent in the previous 25 days.

All told, the region burned more than 2 million barrels of oil for electricity generation, more than double the amount burned in all of 2016. By the end of the cold snap, the region only had 19 percent of its maximum capacity of fuel oil available.

The study predicted that the northeast region could see energy shortfalls occurred under nearly every scenario for winter 2024/2025 and that emergency actions would be needed to “keep power flowing and protect the grid.”

The lack of pipeline capacity sent both natural gas and electricity prices soaring. Natural gas prices in Massachusetts, which had averaged below $10/MMBtu in early December 2017, went above $20/MMBtu for much of the cold snap before reaching a peak of $78.35/MMBtu on Jan. 5.

Renewables were of little help during the cold snap, with cloud and snow cover preventing solar panels from reaching their seasonal potential, according to the ISO-NE. The ISO-NE said wind generation across the region also varied as wind speeds changed during the two-week cold snap and transmission congestion forced curtailments of some wind farms.