U.S. greenhouse gas emissions dropped 2.5 percent in 2016 from 2015 levels and 12 percent from 2005 levels, according to EPA’s most recent edition of the “Inventory of U.S. Greenhouse Gas Emissions and Sinks.”

The 2016 decline was largely a result of substitution from coal to natural gas consumption in the electric power sector and warmer winter conditions that reduced demand for heating fuel in the residential and commercial sectors. The percentage decline in greenhouse gas emissions from U.S. power plants was even larger than the decline in total greenhouse gas emissions—dropping 24 percent from 2005 to 2016.

According to the Energy Information Administration, the carbon dioxide component—the largest component of greenhouse gases—declined by 1.6 percent in 2016 and an additional 0.7 percent in 2017.

The U.S. experience is in sharp contrast to global carbon dioxide emissions, which are expected to increase by 2 percent in 2017 from 2016 levels, reaching 41 billion tons. 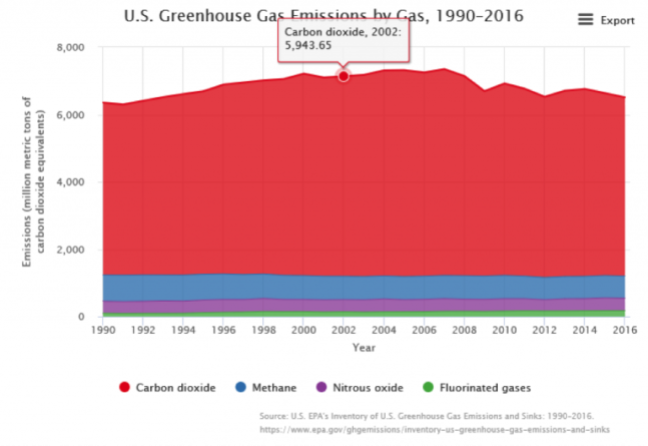