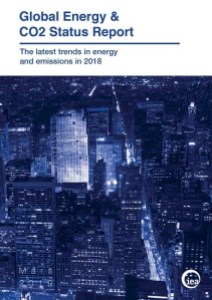 Although global energy emissions increased 1.7 percent in 2018, without an increase in global natural gas consumption, “the increase in emissions would have been more than 15 percent greater.”

According to the report:

“Fuel switching between coal and gas accelerated in 2018, reducing the carbon intensity of global energy use. Driven by economics and policies, coal-to-gas switching avoided almost 60 Mt of coal demand, with the transition to less carbon-intensive natural gas helping avert 95 Mt of CO2 emissions. Without this coal-to-gas switch, the increase in emissions would have been more than 15% greater. This switch, most significant in China and the United States, reduced emissions by 45 Mt and 40 Mt, respectively.”

The IEA report says that global energy consumption increased in 2018 at nearly twice the average rate of growth since 2010, driven by a robust global economy and higher heating and cooling needs in some parts of the world. Demand for all fuels increased, led by natural gas, even as solar and wind posted double-digit growth. The report continues:

“Natural gas consumption grew by an estimated 4.6% in 2018, its largest increase since 2010 when gas demand bounced back from the global financial crisis…The switch from coal to gas accounted for over one-fifth of the rise in gas demand.”