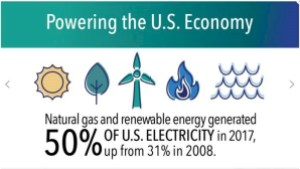 The Business Council for Sustainable Energy recently released the 2018 edition of the Sustainable Energy in America Factbook. Among the findings, natural gas and renewables combined to generate 50 percent of U.S. electricity in 2017, up from 31 percent in 2008.

Natural gas retained its position as the No. 1 electricity generation producer in the U.S. in 2017, producing 32 percent of U.S. electricity while renewables produced 18 percent.

Thanks to historically low natural gas prices, the report also found that U.S. consumers devoted a smaller share of their spending towards electricity than at any time ever recorded, while the total share of household expenses dedicated to energy costs also hovered near an all-time low.

“American consumer spending on electricity shrank slightly in 2017 to 1.3% of personal consumption expenditures, down from 1.4% in 2016. Greater energy efficiency and the continued availability of cheap fuels likely contributed to keeping electricity costs a modest part of total consumer expenditures.”

“Natural gas has become increasingly affordable for consumers. Retail prices for the commercial sector averaged just $8/mcf in 2017, down 42% over the past decade and near the recent trough observed in 2016. Gas prices for the industrial sector have followed a similar trajectory but continue to undercut commercial rates, averaging just over $4/mcf in 2017.”

The report also stated that U.S. power sector greenhouse gas emissions have fallen to their lowest levels since 1990, including a 4.2 percent drop from 2016 levels in 2017.