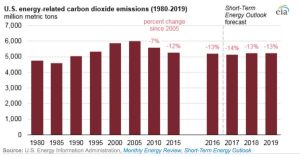 “To be sure, while other factors (such as renewable energy incentives) also had an impact, the clearest means by which to reduce CO2 emissions has been to reduce the cost of generating electricity with less CO2-emitting fuels (i.e., substituting natural gas for coal). So successful have market forces been under the existing regulatory framework to date that estimated 2017 CO2 emission levels are already at the CPP’s 2025 target…”

The article notes that in 2009, the U.S. pledged to reduce overall greenhouse gas emissions by as much as 83% by 2050 and by 17% as early as 2020. This pledge culminated with the U.S. Environmental Protection Agency’s Clean Power Plan in 2015. The CPP would have led to a 32% reduction (from the 2005 level) in CO2 emissions from fossil fuel power plants by 2030—a reduction intended to provide between one-third and one-half of the U.S.’s total intermediate-term Paris Agreement commitment.

Although the CPP never went into effect, the U.S. is close to reaching the CPP’s 32% reduction target by 2030. The latest U.S. Energy Information Administration (EIA) data says that that U.S. power plant carbon emissions declined just under 30 percent — from 2.7 billion tons to 1.9 billion tons — from 2005 to 2017.