Calculating the benefits of US LNG exports | Williams Companies 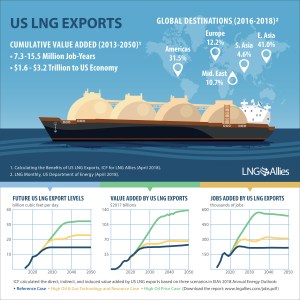 The cumulative contribution to US economic growth from the addition of more LNG plants will range from $716 billion to $1.267 trillion between 2013 and 2050 under three cases, an ICF Inc. study commissioned by LNG Allies recently projected.

The updated ICF study summarizes the potential for significant economic benefits and job growth from the U.S. liquefied natural gas (LNG) industry. The report used the most current U.S. Energy Information Administration (EIA) data based on three cases in their 2018 Annual Energy Outlook (AEO) released in Feb. 2018. The three cases include the Reference Case, the High Oil & Gas Case, and the High Oil Price Case.

Key findings from the new ICF study include the direct, indirect, and induced value added from 2013 to 2050 for the three AEO 2018 cases:

Efforts to serve the surging LNG market continued in February 2018 as construction kicked off on the Gulf Connector project. Constructed in two phases, Gulf Connector is designed to deliver 75,000 dekatherms per day to Freeport LNG Development, L.P.’s liquefaction project by the second half of 2018, and 400,000 dekatherms per day to Cheniere Energy’s Corpus Christi LNG terminal in 2019.

The U.S. EIA anticipates that the nation will become a net exporter of natural gas this year for the first time since 1957 as production outpaces domestic demand. By the end of next year, it anticipates U.S. companies will have the capacity to process 9.5 billion cubic feet of LNG per day.