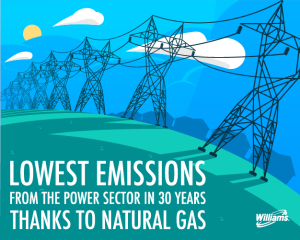 Thanks to the increased use of natural gas, carbon dioxide emissions from the U.S. power sector were at their lowest in 30 years, according to a U.S. Energy Information Administration monthly report.

The federal agency reported total fossil fuel consumption in the national power sector was at its lowest level since 1994.

EIA anticipates that use of natural gas in the power sector will continue to grow, increasing from 32 percent last year to 34 percent through 2019.

For renewables, the share was slightly less than 10 percent last year and grows to nearly 11 percent next year.

“These changes in energy consumption and efficiency have also affected carbon dioxide (CO2) emissions from the electric power sector, which in 2017 were the lowest since 1987. Because coal combustion is much more carbon intensive than natural gas combustion, CO2 emissions from coal were more than double those from natural gas in 2017, even though natural gas provided more electricity generation.”