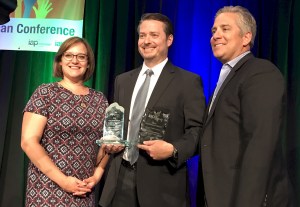 Williams was recently recognized by the International Association for Public Participation (IAP2-USA) for its work in engaging with and collaborating with the public and other stakeholders during the planning phase of the Atlantic Sunrise project.

The IAP2 is an international federation of professionals in 26 countries working to advance the practice of public participation.

During the awards ceremony in Victoria, B.C., Williams received the prestigious Core Values Award, in addition to being named the 2018 Project of the Year.

During the planning phase of the nearly 200-mile Atlantic Sunrise pipeline project, Williams collaborated with landowners and other stakeholders to adopt approximately 400 changes affecting more than half of the originally-designed greenfield pipeline route. The company used public meetings, contact with local officials, community leaders and affected landowners to identify and attempt to resolve issues or concerns prior to submitting its federal certificate permit application.

IAP2 judges said Williams’ work on Atlantic Sunrise helped raise the bar in the field of public engagement, “setting a new standard” for the pipeline industry.

“We’re honored to have been recognized by IAP2 for the thoughtful approach and careful planning by the entire project team that went into developing this important infrastructure project.”

The Atlantic Sunrise project was designed to expand Williams’ existing Transco pipeline to connect abundant Marcellus gas supplies with markets in the Mid-Atlantic and Southeastern U.S. It is scheduled to be placed into service later this month.