However, not long after construction is complete, there’s actually very little evidence that a pipeline is underground.

For example, just two years ago Williams installed an 11-mile pipeline lateral connecting its Transco natural gas pipeline to an electric power generating facility in Cecil County, Md. The photo on the left shows the pipe strung along the permanent right of way in Lancaster County, Pa., in October 2015. 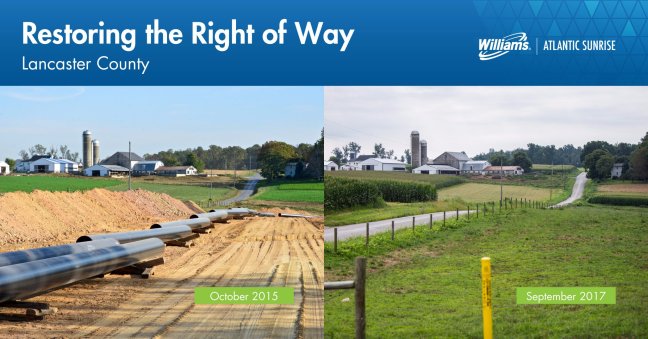 The photo on the right was taken in the same location less than two years later. With the exception of the yellow pipeline maker, you’d be hard-pressed to know a pipeline was present.

That’s because our policy is to clean up and restore the work area as soon as possible to its original condition. That means quickly commencing cleanup and restoration activities, including replacing topsoil and grading the construction right of way to restore pre-construction contours.