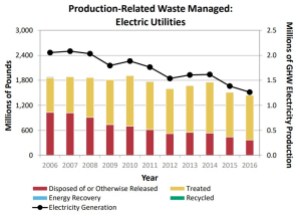 The U.S. Environmental Protection Agency recently released is Toxics Release Inventory (TRI) for 2016. Among the findings, the electric power sector decreased its releases of air toxics in 2016 by 35% from the prior year’s level. This was partially due to the increase in the utilization of natural gas and the continued shift away from coal for electricity generation, the agency reported.
The report notes that air releases fell to 829 million pounds in 2016, down by 58% from 2006. The EPA said the largest reduction in air releases came from electric utilities as they shift from coal to other, lower-emitting energy sources such as natural gas.
“Production-related waste managed decreased by 453 million pounds (24%) since 2006…The recent production decrease (beginning in 2014) was driven by the industry’s transition to natural gas”
Electric utilities’ air releases accounted for 14% of the national total in 2016.

Total TRI releases from utilities fell 64% between 2006 and 2016. Coal’s share of U.S. electricity generation has declined steadily in recent years. By the end of 2016, coal accounted for just over 29% of nationwide generation, compared with 46% in 2011.