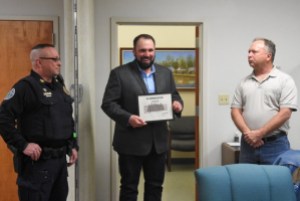 The Republican Herald reports that Williams employee Tim Reed was recognized April 19 by the Pine Grove Borough Council for his response to an incident he witnessed involving a Pine Grove police officer.

The newspaper reports that while on his way to work on the pipeline in February, Reed witnessed an officer engaged in a struggle with a suspect. Reed, a former Marine, rendered assistance to the officer and remained with him as the suspect was apprehended and arrested. According to the police report, the suspect was under the influence of methamphetamine and was out of control.

Reed told the paper, “I’m a Marine and that’s what we do. “I saw it was one-on-one and it was just instinctive to help out.”

Reed was recognized for his bravery Borough Council and received a certificate of appreciation presented by Pine Grove Mayor Will Shiffer and Police Chief Thomas Trotter.

Mayor Shiffer told the paper that its the first time since he’s served as mayor that a civilian has assisted a member of law enforcement in that manner.

From the Republican Herald:

“According to Shiffer, the pipeline employees have been good neighbors and have patronized local businesses too. Reed said Williams tries to assist the community and has provided donations to the Pine Grove area.
“We’re all here working and we do our jobs. We try to help out as much as we can and donate to different causes,” he said.
Read the full account of Reed’s heroism here.