Hawk Mountain Sanctuary, The Conservation Fund, Berks Nature, and the Pennsylvania Game Commission have partnered with Williams to conserve vital acreage for migratory birds, announcing plans to protect and improve more than 77 acres of farmland located in the shadow of the Kittatinny Ridge in Berks County, Pa. 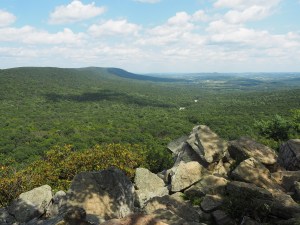 These lands are being conserved, in part, thanks to funding from Williams in connection with the construction and operation of the company’s Atlantic Sunrise natural gas pipeline project.

“Cooperation is the keystone of smart conservation, especially when it comes to land,” says Bryan Burhans, Executive Director of the Pennsylvania Game Commission. “This project will protect habitat for declining species such as the northern harrier, American kestrel, Eastern Meadowlark, bobolink, grasshopper sparrow and more.”

With assistance from Berks Nature and support from Williams, the Sanctuary purchased the tract, which was under threat from developers. Working with the Pennsylvania Game Commission, the conservation partners developed a land improvement plan to convert the former fields into native grasslands and meadows. In turn, this work will support migratory birds and other wildlife and expand wildlife diversity and recreational opportunities.

“This is public-private partnership at its best,” said Williams Chief Operating Officer Micheal Dunn. “The Commonwealth identified the protection of this property as a top priority, so we are glad to have the opportunity to coordinate with our partners in the preservation of this important wildlife habitat.”

The Property has long been identified by state and local planning organizations as a top priority for protection due to its location at the base of the Kittatinny Ridge, a mega greenway and migration superhighway, as well as its adjacency to the Appalachian Trail and State Game Lands. To ensure public access, the property was transferred at signing to the Game Commission, as an addition to the adjacent State Game Lands106. Future plans include planting of grasses and other native species and addition of a parking area along Hawk Mountain Road.

During spring and fall, more than 150 species of raptors and songbirds follow the Kittatinny Ridge or “Blue Mountain,” using habitats along its slope and base to rest and feed. The 2,500 acres at Hawk Mountain and the 9,000 acres of adjoining State Game Lands offer healthy habitats for forest wildlife, but field, riparian, and wetland species have declined.

Read more about this project on the PA Department of Environmental Protection blog post.