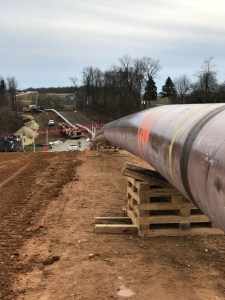 Author Jude Clement answered the question in a Jan. 7 article, pointing out that the lack of pipeline infrastructure in the Northeast has created a chain reaction, resulting in a natural gas shortage which has caused prices to skyrocket and CO2 emissions to spike.

“… natural gas prices in some parts of the Northeast boomed 60-70 times their recent rates because there’s not enough pipeline capacity in the region to bring in natural gas in times of high demand. After years of warnings, this remains a massive problem: gas is increasingly being utilized in the Northeast for both generating electricity and heat. For example, gas provides over half of the power in the region, despite no significant gas producing state there.”

Clement points out that with such gas shortages, heating oil was forced to make up much of the difference, resulting in greater CO2 emissions. The U.S. consumed a record amount of natural gas on New Year’s Day — about a 50 percent jump above the a few days prior.

“Even worse for policymakers, there’s no logical reason why the Northeast is in such a dire situation. That’s because mighty Appalachia is very close by. Combined at now nearly 27 Bcf/d (versus <23 Bcf/d last January), West Virginia, Pennsylvania, and Ohio now produce more gas than any other nation except the U.S. itself and Russia.”

Clement notes a number of pipeline projects that will provide relief to the region, including Williams’ Atlantic Sunrise project which is currently under construction.